At Tuesday night’s budget hearing (which I attended the tail end of), there was a short exchange at the very end that you may have missed.  (You can find it beginning at the 2 hour 31 minute mark.)

Councilor George Russell asked that the administration confirm that Cable Services division is not filming events from other community groups besides city departments.

Mr. Trainor confirmed that the Cable Services division filmed WRRB‘s Thomas Green awards, which included city employees.  City Manager Augustus said the standard is that if the WRRB (or another organization) hosts an event that features a city employee or department head, then Cable Services will film it, at the discretion of the City Manager.

Counclor Lukes reminded us that a (heated) discussion arose a couple of years ago when the Research Bureau had some programs shown on Channel 12.  She said that the WRRB website and reports are likely more informative to candidates and residents than many City Council meetings, and that she doesn’t want Channel 12 programming restricted to members of the City Administration.

Now, perhaps that would be necessary in a city without a People’s Channel.

But in Worcester there is no reason why any community group cannot approach the folks at WCCA to record and disseminate any event of interest to residents.

The reason WRRB insisted on using Channel 12 (the government channel) versus Channel 13 (the people’s channel) is that the organization had been advocating for massive defunding of WCCA for years.

They couldn’t “stoop” to using WCCA without admitting that perhaps they were wrong in their assessment of the channel’s importance to our community.

Councilor Russell had a point two years ago, and the point still stands: WRRB is not a government group, and there should be clarity about what is an official government communication.  That doesn’t mean the WRRB is not valuable, but it’s no different from other community organizations regarding the conditions under which their programming should be shown on the government channel.

I am glad that Councilor Russell pushed for this two years ago, and I’m glad he continues to push for clarification.  Then as now, it was about fairness and not about the gender of the WRRB’s executive director.

I hope that the new executive director of WRRB could work with WCCA to broadcast various events (like June 5’s annual meeting) that don’t meet the guidelines for the government channel.  (Also, you can now follow WRRB on Facebook and on Twitter.)

I also hope that if you’re reading this and care about WCCA that you will consider applying to serve on the Cable Television Advisory Commission, which has four openings.

Readers of this blog are undoubtedly aware that there are bookcases at Union Station where commuters can find some reading material for their trip to/from Boston.  We call it the “Give and Take“, though more folks take than give.

Usually it’s books that are on the shelves, since that’s most of what is donated to the Friends of Worcester Public Library.  Many places don’t accept donations of magazines or other media, but these are often perfect for the Union Station bookcase, as a magazine is lightweight and one or two would be ideal to kill some time en route to points east.

Rather than put your magazines in a curbside recycling bin each week, why not save them and donate them to the “Give and Take” at Union Station?  That way, others can enjoy them as well before they’re finally ground up for reuse.  You can bring them there yourself, or if you’re in the greater Worcester area, contact this blog to make arrangements to have them picked up.

A big batch of magazines was donated last week!

And although not terribly useful on the commute, we’ve had donations of audio cassettes, audio books, CDs, DVDs & VHS videos that, when left on the shelves, are quickly scooped up by travelers, presumably for enjoyment at home.  If you’ve got these sorts of things collecting dust in some corner, gather them up and let us find them a new home!

(And many thanks to Cathy Walsh’s husband Paul for the generous donations to these shelves a few weeks ago!)

There is an opening on the Worcester Public Library board for Dante Comparetto’s old seat (term expires in December 2015).

If you’d like to serve on the WPL board but do not want to make a commitment for the full six years, this is your chance!

If you’re interested in applying, the city clerk will need to receive your letter of intent and resume to by Friday, June 13 at noon.

For more information about the process, please read this flyer.

If you have any questions about the process, send Jim an email.

(I will not be applying as I would need to step down from my position on the WPL Friends Board, and I would also like to serve out my term on the Hope Cemetery Commission.)

It’s been a couple of years since we looked at gender inequality in prostitution arrests in the City of Worcester.

As I said a couple of years ago, it’s difficult to track prostitution-related arrests.  So allow me to focus on the press releases issued by WPD for 2013-2014:

So — from the press releases for the past year and a half, 70% of the prostitution sting arrests have been women.

I’m not sure if the Vice Squad was anticipating the #YesAllWomen hashtag, or somehow took it the wrong way.

Not to sound hysterical, but would it be too much to ask for a bit of gender parity in Main South prositution stings?  (Especially considering the effort we took to try to impound johns’ cars just a few short years ago…)

You may be wondering why we haven’t announced any spring planting sessions for TBUG.

Due to construction at that end of the Common this spring and summer, we will not be able to plant, weed, and water at Turtle Boy.

Once construction is done, we will be back to urban gardening, with a larger area for planting and a drip system to water the plants.

Here are some of the highlights of what will be happening over the coming months:

Gulf War Memorial. The city will try to make available an area of about a foot (perhaps more) in front of the memorial so that we can do better planting. 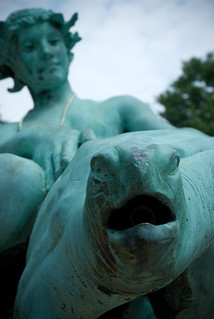 Turtle Boy itself.  The monument will not be moving, but it will be surrounded by a much larger oval, with more space in back (towards the Common) than in front.

Size of the oval:
from edge to edge = 45 feet (long part of oval)
from front to back = slightly over 25 (short part of oval)

Curbing around the oval: There will be a 6″ reveal (not quite a curb) at the front of the monument; lower in the back.  This should be good for providing a little more of a “step up” that will help plows avoid the planting area in the winter.

LIGHTS!  There will be two lights in the front of the monument for lighting it at night.

Water.  There will be a 1″ copper line from the road, and a drip system for the plantings.  There will be opportunity for water/filtration if there’s ever money for re-plumbing the fountain.

The Higgins Armory may now be but a memory for most people, and its armor is now either at the Worcester Art Museum or in the hands of new owners, but there are still some odds & ends that need to be liquidated.

Bottom Line Exchange of Southborough has the somewhat unglamorous task of finding new homes for the less valuable and/or practical items left behind at the Armory, and will be auctioning these things to the highest bidder next month.

Some of the items on the block include:

For more information about the auction or preview events, e-mail Bottom Line Exchange or call them at 508-480-9800.

You can look at the AAMD website for other area museums that are participating.

The Friends of the Boylston Public Library will be having their annual booksale on Memorial Day, May 30 from 9am-2pm.  (Special preview sale is from 8am-9am; cost is $20.)

I cannot recommend this booksale enough.

The selection is great, the prices are pretty good, the library is adorable, and the sale is part of a larger Memorial Day commemoration.  There’s a big fair on the common, an extremely cute parade down the street, bouncy castles, cotton candy, popcorn, etc.

And — conveniently down the road in Northboro — the First Parish Northboro has a Memorial Day Fair from 11am-3pm, with a book sale, plant sale, and the best strawberry shortcake ever.  (The biscuits are amazing!!)

So — hit the Boylston book sale, have a run or two through an inflatable attraction, then go to Northboro for more books and strawberry shortcake.

Of course, none of this is to diminish from the whole point of Memorial Day, which was originally established to remember those who died in the Civil War.

There are some official Memorial Day commemorations in Worcester.  Please attend one (or more):

Water Ceremony – Sunday, May 25, 2014, 2:00 PM at Elm Park. Registration is at 1:15 PM at the corner of Russell and Highland Streets. A Water Ceremony honors Veterans who died at sea and/or have no traditional grave.

127th Memorial Day Observance Remembrance Ceremony – Monday, May 26, 2014, 9:00 AM at Hope Cemetery. Participants will meet at 8:45 AM inside the Main Gate for a short procession to the G.A.R. Veterans’ section (#45). Event will also include a speaking agenda and military tribute. This ceremony is an opportunity for the citizens of Worcester to honor its military heritage, its Veterans and those who are still serving our Country.

Massachusetts Vietnam Veterans’ Memorial at Green Hill Park Wreath Laying Ceremony – Monday, May 26, 2014 at 11:00 AM. Sponsored by the Perpetual Care Committee of the Memorial.

I know last year there had also been a ceremony at the Korean War Veterans Memorial; if anyone knows if/when it will be this year, let me know.

If there’s a teenager in your life (or if you or anyone you know enjoy audiobooks), Audiobook Sync is once again offering two free audiobook downloads every week this summer!

This began last Thursday, and each selection is only available for a week, so if you see audiobooks you’d like, make a note on your calendar!

The schedule is as follows; they usually pair a contemporary book with a classic one:

May 22 – May 28
CRUEL BEAUTY by Rosamund Hodge, Narrated by Elizabeth Knowelden (Harper Audio)
OEDIPUS THE KING by Sophocles, Performed by Michael Sheen and a full cast (Naxos AudioBooks)

May 29 – June 4
CONFESSIONS OF A MURDER SUSPECT by James Patterson and Maxine Paetro, Narrated by Emma Galvin (Hachette Audio)
THE MURDER AT THE VICARAGE by Agatha Christie, Narrated by Richard E. Grant (Harper Audio)

June 19 – June 25
I’D TELL YOU I LOVE YOU, BUT THEN I’D HAVE TO KILL YOU by Ally Carter, Narrated by Renée Raudman (Brilliance Audio)
ANNE OF GREEN GABLES by L.M. Montgomery, Narrated by Colleen Winton (Post Hypnotic Press)

You can find free downloads of other kids’ books here, and plenty of books to read and listen to are available from the Worcester Public Library.