In case you’re interested in renting skates at the Worcester Common Skating Outlet, keep in mind that you’ll need to give a $25 deposit for each pair of skates.

The deposit can be made either through a credit card [charged only if the skates are not returned] or with cash.

In addition, you can’t lend the skates to anyone else that day.

In fact, “SKATE RENTALS ARE FOR ONE SESSION ONLY. MANAGEMENT RESERVES THE RIGHT TO NOTIFY THE RENTOR TO RETURN SKATES AFTER ONE SESSION FOR USE BY OTHERS.”

Not sure how long a session is — I’m assuming it’s whenever the Zamboni needs to make a trip onto the ice.

You can find the rental agreement here.

The forum was less informative than many of the library district meetings have been, which was unfortunate because many of the audience members who asked questions during the Q&A session wanted to talk about specifics, and in detail.  There were questions about sustainability/alternative energy, public schools, the residential components of the district, and — yes — the proposed hockey complex.

What the Q&A session showed me (and should show city leaders) is that there is a real desire for deeper discussions about both the big picture (and long-term planning) and the details.  We constantly talk about how much of an asset the colleges are, and ask how we can retain college students.  Having frequent forums like this, with greater detail and more discussion, would certainly go some way towards making Worcester the kind of place a college student might like to live in after graduating.

Of course, college students — and how to attract them to the downtown — were a big part of WBDC President and CEO Craig Blais’ talk.

When Councilor Lukes asked about the WBDC’s plans for the McGrath lot, Blais spoke a bit about learning from past mistakes.

One of those mistakes, he said, was putting the food court at Saint Vincent Hospital on the inside of the facility, rather than having restaurants face the outside (and thus generate foot traffic outside of the hospital).

I am quite glad Mr. Blais has finally seen the light.  Would that he had seen it fifteen years ago.

Fifteen years ago, various people expressed their opinions about the folly of the MedCity design, and it all fell on deaf ears.

I hope Mr. Blais has progressed in his urban design enough to understand that the way to fix urban renewal is not more urban renewal.

At the beginning of his talk, Mr. Blais said that it was “important that we plan with input from the community…but respond to needs of the market” and that a “master plan is the important first step” in developing land.

One wonders which community Mr. Blais was getting input from, because it sure wasn’t the residents of Worcester.

And one wonders why a master plan — rather than a community planning discussion — is his first step.

Mr. Blais talked about meeting with “stakeholders” to discuss ideas.

But he wasn’t looking for ideas from those stakeholders — he was already presenting a fait accompli.  (Why else would the WBDC be pursuing market studies on the hockey complex for the McGrath lot after being told by the library that the complex was not welcome?)

However, I hope that people do not focus too much on the proposed hockey arena to the detriment of a much richer discussion of possibilities.

And — as Mr. Blais continues to mention so passionately — we need to think about what will attract college students downtown.

A large, single-use facility that adds nothing to the vibrancy we need downtown is not going to do that.

Last night’s forum proved that there are people in this city who are ready and willing to talk about urban design issues, and who really want to see the downtown succeed.

Let’s not squander this opportunity to engage citizens to benefit the downtown.

My notes from last night; I didn’t catch all of the Q&A session because I was waiting in line to ask a question…

First speaker is Tim McGourthy – “an articulate spokesperson for the city of Worcester, and a really great guy.”

Over 40% of jobs in Worcester are those employed by colleges and universities.

Between 2000-2008, jobs and incomes grew in Worcester more than any other part of the country?  State?  Missed that.

“I will have succeeded when I put myself out of work” – that is, when the private sector can do all the investment

Deb Packard – PW was founded in reaction to urban renewal.

Been calculated that theatre generates over $13 million in economic spinoff (not the words she used) a year.  Whaat?

Supports new and attractive structures melding with the old.  “Temporary custodians of the built environment”

Jim McKeag – talk about collaboration and partnership within the community.

Downtown Neighborhood Alliance is just over a year old.

Complaints of local business owner that he wasn’t getting response he would have liked from city regarding crime, vandalism, etc.

They decided to focus on communication.  To date, success is to keep people informed, bring police and inspectional services’ attention to certain items, has researched some problems in downtown with the WBDC and the city.

Discussion of need for community policing (but no money for it).

One of the things we need to do in a time that’s seeing resurgence of small cities – we’re not just a suburb of larger metropolitan areas – need to advocate as an urban and a regional center.

Craig Blais of the WBDC –

Word to Ed Madaus and Paul DeMoga – believe it or not, it was 10 years ago that they walked into the WBDC offices – visionary leap of faith for downtown.

1965 a group of businessmen came together and founded the WBDC – charter to be leading force in economic development.  Started with $2million and a charter from the legislature.

Bob Bowditch on WBDC’s success – partnerships at all levels of government and with private business.

Second: Biotech phase (“ahead of its time” – “led the fight….to pass zoning ordinances” to allow research)

“Master plan is the important first step” in getting things done.

“need to connect the vision with what can get done”

Board of directors started with strategic plan for downtown.  What area would WBDC be best fit with its resources?

Question asked by board – what is the next chapter in Worcester’s future?
Answer: 35 acres around the Hanover Theatre

Growth from CitySquare has to come this way.

Goal – leading with people and with density.

To attract people to downtown, focus is on colleges.

Signed an MOU with the City of Worcester and made it clear that the #1 priority for downtown is CitySquare.

They [CitySquare] should attract class A office space, market-rate housing, and even a hotel.

The WBDC will be focused on attracting colleges and universities to this area.

Connections are critically important – convenient pedestrian connections between CitySquare through various development opportunities throughout district, that pedestrians can move through the district in a quick and safe way.

He keeps talking about a “master plan”

Jane Jacobs quote to end it.

Tim – when you look at map of downtown Worcester, residential is a big component of that.

Mayo is putting in many units.

Jane Jacobs quote – requires people to live and do business in area if it’s going to be an 18-hour downtown.

Could we use the river for hydroelectric?  Grow more food?

Deb Packard mentions that preservation is green – most buildings built before 1950 are pretty green.  Encourages city and WBDC to preserve and not tear down buildings.

Jim McKeag echoes – how do we look at economy in the long term?  Should be community discussion about this.  Aging infrastructure that will need to be addressed at some point.

Q: Worcester has been recognized for progress in many areas [originally from Austria].  Wants to hear about WPS and how this fits into overall strategy.

A – Tim: public school system that doesn’t work is what creates sprawl, because it encourages people to move further out of the urban core.  With new North High School and new Worcester Tech, two of five high schools are new.  Making sure that public school system that would support economy is key.  Various levels of education and training – work with employers so that they can create employees who help economic growth.

Jim – cannot have a conversation about urban planning without discussing public school system. In past plans, has often been left to the side.

Q: would like to see follow-up forum about energy.

The MBTA has rolled out the mTicket app to the Framingham/Worcester commuter rail line. 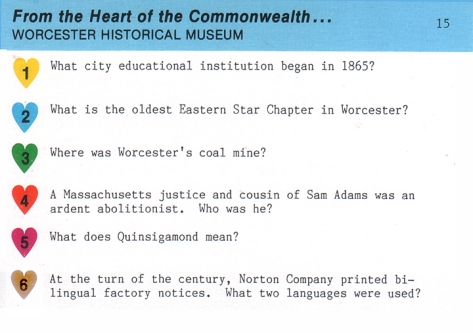 This evening the Rules Committee met to discuss the potential to tweak the selection process for the Worcester Public Library Board of Directors.

The process, as it exists now, is an informal meeting with councilors and applicants before a City Council meeting, and then a vote on those applicants at the meeting.

The recommendation before them had been to have the applicants interviewed by the Education Committee, and then to have a transcript of that meeting sent to the full City Council.

The Rules Committee decided against that, and will recommend instead that applicants speak before Council at a meeting, and then have the vote at a subsequent meeting.

So — this will be before the Council in an hour.

If it passes, the way it would work this year is that on December 4 applicants would be able to speak for three minutes before the Council.  (The applicants would not be required to speak, but would be given the opportunity.)

Then the Council would have a final vote on December 18.

Friendly reminder that the Building the New Worcester forum will be held tomorrow, Wednesday, November 28, at 5:30pm at the Hanover Theatre.  This is free and open to the public.

If you care about the Theatre District or downtown as a whole, you should attend this forum.

Many have called The Hanover Theatre a catalyst for the revitalization and rebirth of Worcester. Welcoming over 170,000 visitors annually, it has had significant economic impact, and is beginning to create a vibrant and exciting cultural destination in central Massachusetts.

Questions and dialog from the audience will follow the presentation. Plus, join us at a networking reception after the presentation to socialize with panelists and invited guests. 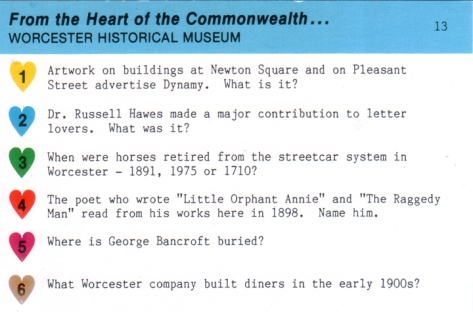 When we last left the Worcester Common Skating Outlet, children under 10 could skate free.

If you’ve checked the website recently, you’d find that in addition to the skating rink being open Wednesdays and Thursdays for lunchtime skating, plenty of learn-to-skate classes (with helmets required) offered, and even a skate sale this Sunday, the skating rink will now only be free to those aged 6 and under.

This might not seem like a big deal to you (except, I suppose, if you’re between the ages of 7 and 9), but …

I have no problem paying a small fee to ice skate, but when my tax dollars and yours have already been used to construct a rink, and private donors have paid a lot of money to operate that rink, I fail to see why we need to have advertisements on public land, and why children should have to pay to use that public land.

There are seven announcements on the main City of Worcester website.

Four are about the ice skating rink on the Common.

None are about the Open Space and Recreation Planning Hearings.

Because it’s a lot more important to know about when you can buy used ice skates than mapping out the priorities for open space for the next seven years.

I once again will defer to the film El General: