Last night, the great Juliet Feibel of ArtsWorcester asked Mike and me last night where one can find opera in Worcester.

We went to BarOpera at Ralph’s a couple of years ago, and it was as awesome as you can imagine.  I’m terribly disappointed it didn’t continue.

An event that seems similar is the Mad Men On Tap opera performance at Nick’s, which will be on Friday, May 16.

The singers at Mad Men On Tap are from Greater Worcester Opera.  We’ve seen some of their shows (Die Fledermaus was especially good, but I have a weakness for Strauss Jr.!) and this May/June they’ll be presenting Cosi Fan Tutte, or How I Met Your Mother:

Opera Worcester also presents operas at the Hanover Theater once or twice a year.  We saw La Traviata a couple of years back and it was good.  They’ll be hosting Opera Providence‘s production of Pirates of Penzance on October 18 this year.

Worcester County Light Opera is a bit less light opera and a bit more theater and musical based these days, but is well worth checking out!

If you can get to Boston, there’s quite a bit of opera there —

Guerilla Opera is presenting the world premiere of Ken Ueno’s Gallo. (It will also be livestreamed on May 22.)

Boston Lyric Opera and Boston Opera Collaborative usually have seasons that include both classics and new operas.  New England Conservatory students often present concerts of songs from opera and lieder, as well as the occasional fully or partially staged opera.

And Odyssey Opera‘s offerings excite me to no end!

It may no longer be on the maps, but you can evidently still get to Worcester Center Boulevard from Summer Street: 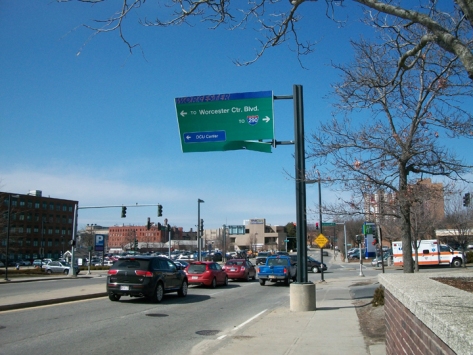 Or from Highland Street:

Let’s forget for a moment that the replacement was unnecessary (the old sign was very legible).  The $50-$100 it cost DPW&P to send someone out to replace the sign would have been much better spent filling the holes in Second Street, some of which you can see in the photo, and that’s just the first few feet of that street.

EVERY sign needlessly replaced in the past decade represents money that can’t be spent filling potholes or fixing streets.

(And, yes, this is a segue to remind folks to read the FY15 city budget.  Ask yourself why we’re budgeting nearly $350,000 for street signs and street painting and only $105,000 for pothole repair [p.194 of the budget].  I’ll try to get some budget posts up before the hearings commence.)

While we’ve been replacing perfectly good signs, Lake Avenue is still bottlenecked & awaiting a major repair — here’s a photo from the other day (a Sunday!) in case you’ve forgotten the plight of the forsaken Worcesterites down by Lake Quinsigamond: 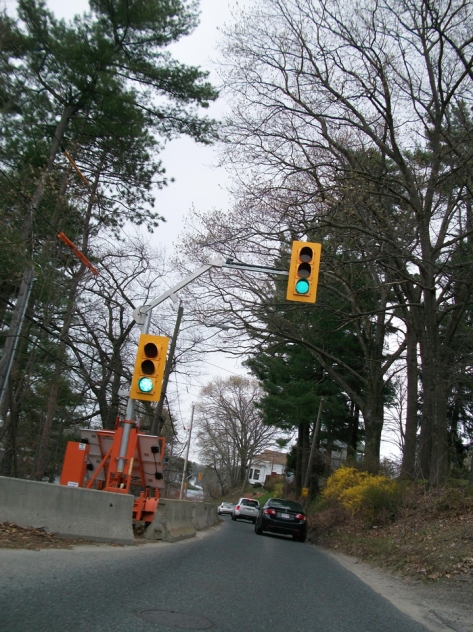 We can get tens or hundreds of new street name signs every year, but the northern end of Lake Avenue must endure a temporary traffic light and one travel lane for YEARS.

The city can even order up  some custom heart-logo mud flaps for its trucks (which, admittedly, are AWESOME): 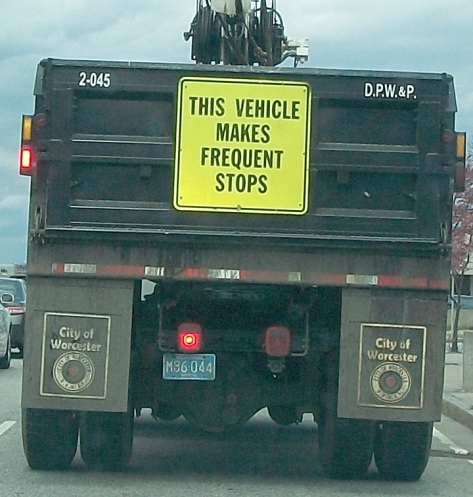 …but we can’t shore up a collapsing a road or fill the craters in all of the rest of the roads.

It would be VERY popular with the electorate if the City Council in its wisdom (and common sense) were to impose a moratorium on DPW&P’s sign replacement efforts until such time as all of our roads are passable.  How often is a public policy issue a win-win choice for politicians?  This one is it, folks.  No one really cares about street sign replacement, but EVERYONE cares about the condition of our roads.  Let’s get our priorities straight and focus on the necessary items instead of wasting time and money on what isn’t necessary.