I’ve been quite upset since the demise of our beloved log bumper vehicle.

And I bet you have too.

While it’s not the same as a rotting log painted with the words “BAD ASS”, the following picture — sent by a friend a few months ago — shows a bumper that’s even nicer than the other deck-bumper guy. 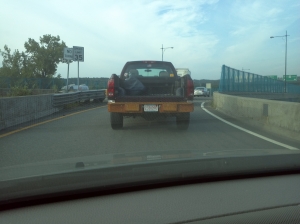 I suppose it was inevitable that all the trades would want to get in on the D.I.Y. bumper craze that’s sweeping greater Worcester.  Today’s featured handyman seems to be a plumber: 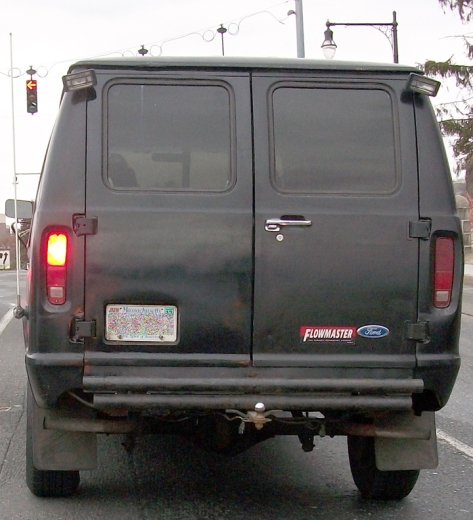 Here we seem to have two slightly different lengths of painted cast iron pipe, probably an inch and a half in diameter.  They seem to have been welded to two plates which are bolted to the arms which used to hold the original bumper.

This bumper’s not nearly as good as last week’s deck bumper.  Both rear quarters of the van are entirely unprotected — the pipes should have been much longer.  In addition, if Pipe Bumper Guy wanted to impress us with his plumbing skills, the ends of the pipe should have been threaded, and four 90-degree elbows could have been used to connect the longer pieces — protecting the ends and giving us a finished look.  Throw in a union joint somewhere for aesthetic appeal and you could have had a masterpiece.  Instead we have an inefficient bumper replacement that offers even less area to stand on when accessing the back of the van than the original bumper had, and no evidence of mad skills.  Sorry, Pipe Bumper Guy, but you’ll need to try harder.

Oh, and the brake light on the right rear of your van is out.

Roaming the wilds of the western suburbs is Deck-Bumper Guy: 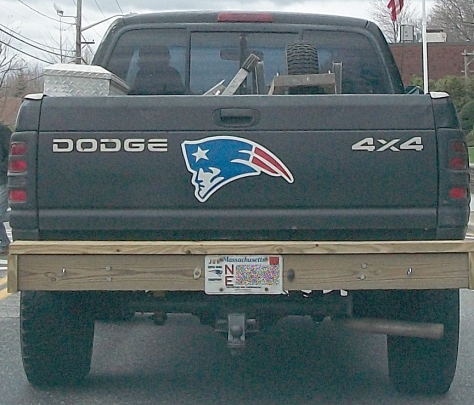 He is what Worcester’s own Log-Bumper Guy wants to be when he grows up & gets some mad skills.  This D.I.Y. bumper features a pressure-treated 4×4 post mounted to the truck with galvanized lag bolts.  Many local cheapskate handymen would have stopped there.  Deck-bumper guy has capped the ends of the 4×4, which protects the end-grain and gives things a “finished” look.  He then installed a pressure-treated 2×6 atop the 4×4, thereby creating a larger deck on which to stand as he accesses his tools & such in the bed . . . but it also creates a protective overhang for his snazzy Patriots license plate.  To complete the look and keep things legal, he has installed lights on either side of the plate, which is something that he’ll need when it’s time for an inspection sticker.  (This slick guy is also rocking the byways with some bright yellow Monroe shocks and a kickin’ trailer hitch.)

Is a wooden bumper a good thing?  Well, assuming this one replaces a metal bumper, the wooden one is a bit of a step down in quality of collision protection.  Better than a rusty metal bumper, I guess.  It’s nevertheless light years better than the plastic & styrofoam that pass for bumpers on 90% of the passenger cars on the road today.  And if this guy does decks for a living — a distinct possibility, given all the tools in the truck bed — then this little beauty is simply good advertising for the quality of his work.

Log-Bumper Guy has been decorating again: 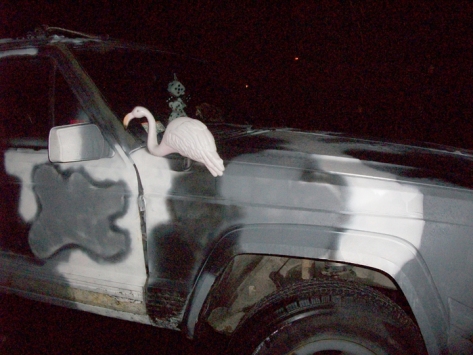 The fuzzy dice don’t necessarily make you wonder about his bad-assness cred, but the flamingo surely does.

Perhaps he’s rethinking his attitude; the log he uses as a bumper once proudly proclaimed him “BAD ASS“, but lately it’s a bit faded and the camou paint obscures the sentiment somewhat: 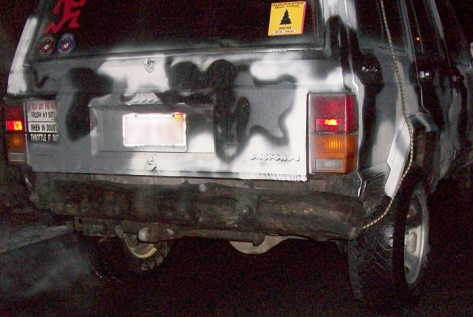 Log-bumper guy has a spiffy new paint job, and the choice of colors isn’t bad for becoming one with the blues & greys of the vinyl siding in his neighborhood (with some black spots thrown in for the potholes).  He’d blend in better if he used more straight horizontal lines like siding instead of camou-style blotches. 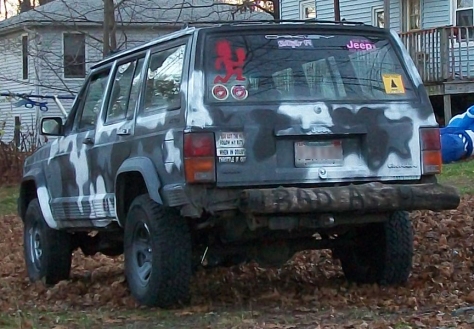 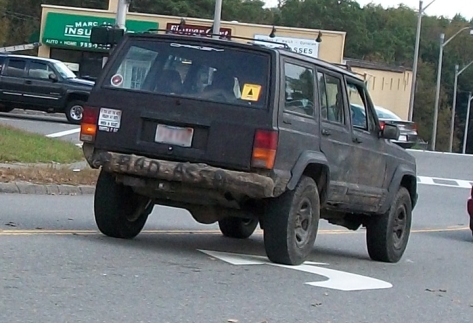 He needs a new bumper. I’d normally send him to Linders or Standard for such an item, but he’s after felled timber instead. He’ll also be happy with a nice hunk of pressure-treated lumber. Ring him up if you’ve got downed trees in your yard or if you’ve been dismantling the backyard deck and have a nice 6×6 post you no longer need. 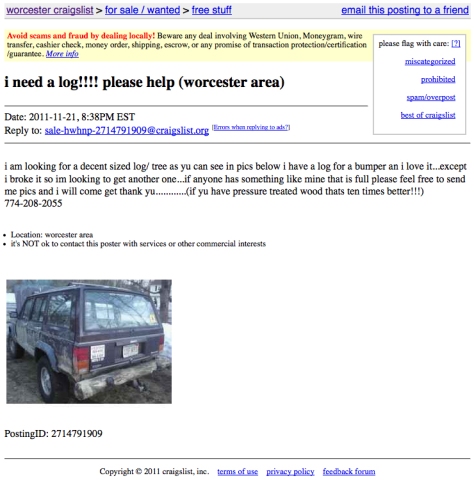 Someone needs to tell this person that we’re supposed to keep Worcester’s firewood in Worcester.  It oughtn’t be travelling the region as a replacement bumper. 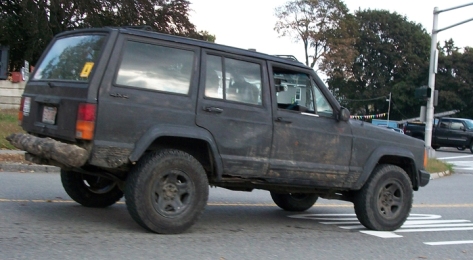 If he/she were truly as “bad ass” as they claim to be, they’d have bolted a steel girder back there instead of a log.  Worcester’s got a lot of spare girders piling up on Worcester Center Boulevard, and they’re ALB-proof.

There are folks with day-glo vests and binoculars tree-gazing on Rattlesnake Hill today.  If they find any Asian Longhorned Beetles, I’m blaming the jamoke in the log-mobile.