Today, the 21st Century version of Front Street was opened to the public.  Several dozen shivering people and a gaggle of local & state politicians past & present gathered for a lengthy program of speakers, followed by a quick ribbon-cutting and the world’s shortest parade.

Here are a few images of what one can see on the new stretch of Front Street: 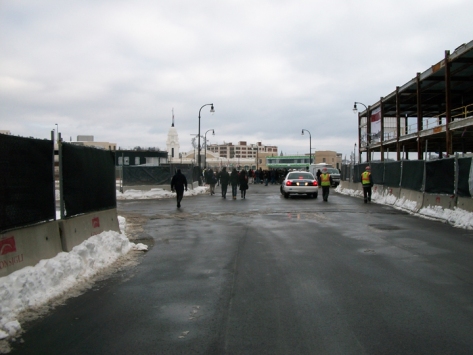 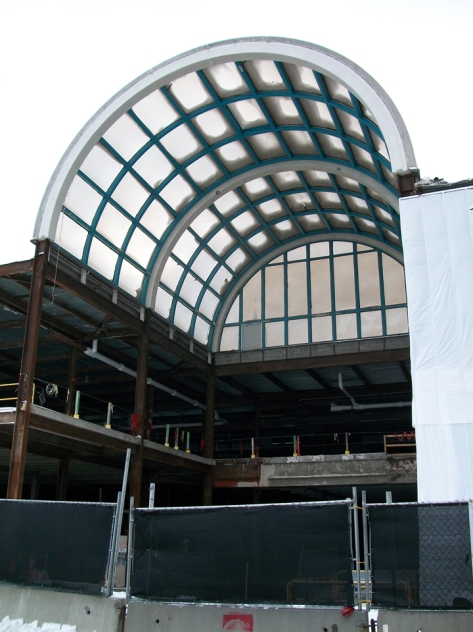 If you’re old enough to remember the street that once passed through here to Washington Square, you’ll know that this new byway bears no resemblance.  If you’re not old enough, a glance at some old photos will make the same point clear.  Although Hanover Insurance President/CEO Fred Eppinger reminded folks that City Square has only completed its first phase, the city administration has already deviated noticeably from its master plan for mixed use development in favor of permitting any sort of building that’s funded by an outfit with deep pockets.

What the Galleria Mall should have taught us is that inappropriate development can be very hard to undo, and I hope we’ll keep that in mind when we begin to discuss the future of the McGrath/Library lot in a couple of weeks. 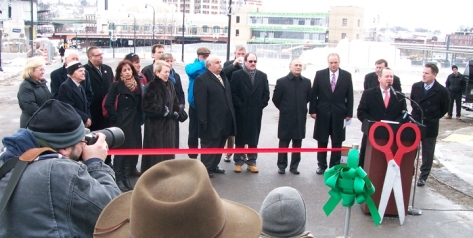 State Rep. John Fresolo, showing what can only be more intelligence than the rest of the attendees, turned up for the last five minutes of the speeches; he had to park his black sedan illegally in the fire lane nearby to get there in time to grab the microphone & add his thanks to several legislators whose names had somehow escaped previous speakers.

Lucky for Mr. Fresolo that he was also just in time to catch Konnie Lukes sneak a quick snuggle with Phil Palmieri:

Then everyone cleared the way for a parade that consisted of a handful of vehicles containing WW2 & Korean War vets (escorted by Worcester’s Finest; serenaded with the theme to Chariots of Fire, followed by “Eye of the Tiger“): 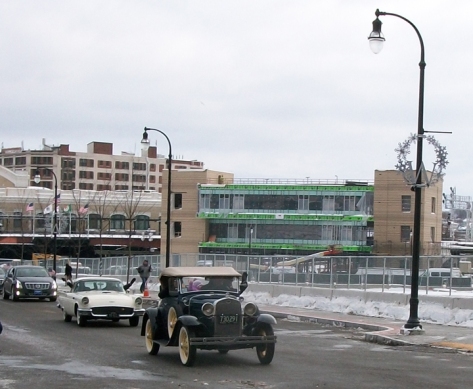 I’m sure those vets remember what downtown Worcester & Front Street used to be like before the mall, and are probably glad the mall’s gone.  They may or may not care for what’s going up in its place, though.

Being a “glass half full” sort of gal, here’s hoping the city administration fills the second half of this glass with mixed use development instead of handing out parcels willy nilly to whichever outfit shows up with cash in hand.

And let’s hope it’s light on the Brutalist/Vladivostok-circa-1967 look that Worcester is so reluctant to shake.

screenprints, as ever, via kwout

(Click on the image for the answers; once again, number 5 is my favorite question!)

(I’ve decided I can’t spell it “theatre” — my fingers just don’t work that way, and I have to backspace out when I type it with an “er” — so “theater district” will be how the blog refers to it from here on out.)

As I’ve been preparing some comments on the theater district plan, I’ve come across a few things that other readers might find of interest.  As always, my trusty tool has been the Proquest Newsstand, which I access using my library card.  Don’t leave home without it.

City officials and business leaders said the theater should result in $40 million in direct and indirect spending annually in the city.

“We stand here today as a testament to believers, to those who see a greater vision for our city,” City Manager Michael V. O’Brien said. “There is a great sense of pride when the ‘can do’s’ deep-six the ‘won’t happens,'” he said.

As folks may recall, there was recently a figure (quoted in the Telegram, December 2, 2012, “Worcester development officials seek collaboration: Downtown is focus of meeting”, by Jon Towne) that the “Hanover Theatre generates about $13.5 million annually in economic impact in the city.”

Some of us are not “won’t happens”; we simply want realistic numbers rather than pie-in-the-sky estimates of economic impact that will never happen.  There’s a big difference between $40 million and $13.5 million, and these sorts of overestimates are a Worcester staple.  Recall, if you will, that we were told MedCity would generate between $5-6 million in taxes annually, and its successor, St. Vincents, barely generates half that (and that’s a combination of property and sales taxes).

The previous proposal for developing the McGrath lot was mentioned at the last library board meeting, and someone mentioned it to me recently.

Around October 2001, there was a request from the City Council for an RFP concerning possible development of the lot.

You can read about the proposal in the article “Housing proposal one way to attract people downtown”, T&G, February 23, 2003.  The proposal was for a 320-unit residential development, with an underground garage.  In that article, it said “city officials have met with representatives of the Worcester Public Library’s board of directors, the Off-Street Parking Board and the City Council.”

My impression is that the library board was not pleased with this proposal (though I don’t see that directly reported in the T&G).

A year later (July 11, 2004, “Mall owner asks to shelve proposal for Library Place”), the proposal went no further — at the request of Berkeley, then-owner of the mall property:

Paul V. LaCava, director of the city’s Office of Neighborhood Services, said last week the new owner of the Worcester Common Outlets mall, the Boston-based Berkeley Investments Inc., has asked city officials to delay issuing the RFP to avoid a potential over-saturation of housing in that area.

For the record: I think the McGrath lot should be redeveloped.  A surface lot is not the best use of that space.  I think the parking should remain owned by the city, and be as affordable as possible.  As long as it remains undeveloped, there will be people who will propose various projects, and I’d prefer that there be discussions about what we want to see — rather than a reaction each time a project is proposed.

(Click on the image for the answers; number 5 is obviously my favorite question of today’s bunch)

I’ll likely write more about each of these before they occur — but here are some meetings readers may want to attend:

The City Council Standing Committees on Municipal Operations and Health and Human Services will discuss the proposed anti-panhandling ordinance on Thursday, January 3rd at 5:30pm, in the Levi Lincoln Chamber of City Hall.

The Historical Commission will meet on Thursday, January 10th at 5:30pm, in the Levi Lincoln Chamber of City Hall.   Among other things, they will be discussing demolition delay waiver requests for the complete demolition of the following buildings: 332 Main Street and 70 Elm Street.

The Worcester Public Library Board of Directors Library District Task Force will have a meeting to discuss ideas for redevelopment of the McGrath Parking Lot on Tuesday, January 15 at 6:00pm. 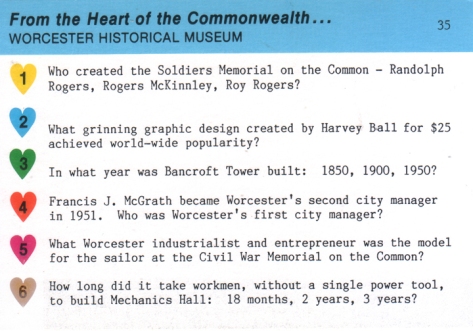 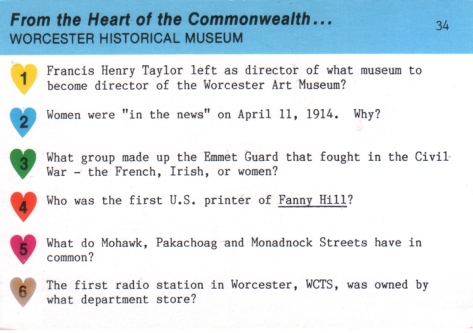