This week, Jeremy Shulkin had a feature on this year’s young and diverse candidates for city council.

While the article itself is worth a read, equally of interest are the comments.  Three of the candidates (Devin Coleman, Tim Beaudoin, and Jim Kersten) responded to commenters’ questions.

You know how much I eat that kind of thing up, but all three answered incorrectly!

The three questions (which were first raised by — you guessed it! — Q) were whether the candidates were in favor of PILOT, the lowest residential tax rate, and neighborhood councils.

The candidates were asked if they were in favor of PILOT.

Jim Kersten: “PILOTS are also needed – we need to have a conversation with all non-profits (not places of worship). Look at what the existing funds have done – kept the Library open regular hours, improved Institute Park, and many others.”

Devin Coleman: “Additionally, Worcester has a very high percentage of non-profits, especially the universities. I met with the President of Clark University yesterday and expressed to him my deep support for the continuation and expansion of PILOT programs.”

Tim Beaudoin: “First, concerning PILOT programs, I can confirm that I am with every other Worcester resident in agreeing that this is not a matter of debate any longer. The city and its neighborhoods deserve PILOT contracts from all of the great schools that have made their home in Worcester and continue to grow here as the years pass. We provide an excellent setting for them, and great city services, and we deserve some good will on their end. ”

Asking a question like “Are you in favor of PILOT?” to a city council candidate tells me nothing.

I can be the biggest Marcel Marceau fan in the world, but unless the city manager negotiates with a troupe of mimes, I’m not going to see any speechless white-faced men in the near future.

The City Council is only in charge of voting for PILOT agreements that the city manager negotiates.

So, better questions to ask the candidates would be —

I’d also like to hear a candidate talk about how difficult it is both to get real numbers on PILOT and to confirm that the PILOT money is being spent in the way we had agreed to.

Jim Kersten: “Raising the residential property tax at this time is nothing more than wrong. Knowing that our water bill was going to spike it was absolutely the wrong time to raise this tax. It’s just shows where the City Council thinks of the middle class and families on a fixed income.”

Devin Coleman: “The bottom line is people are fleeing the city because they simply can’t afford to live here. Lowest Residential is not the whole solution but it’s definitely a step in the right direction.”

Tim Beaudoin: “I am also with everyone else in agreeing that we must maintain low residential property tax rates in a responsible and sustainable way.”

There’s enough for me to dislike in the first two responses: I think people need to start conserving water like it’s going out of style, and I think the latest census figures show that folks aren’t actually fleeing the city at all.

Tim Beaudoin’s answer is a bit more reflective (or, at least, cloudy enough that I can tell he doesn’t necessarily agree with the “lowest residential tax rate.”)

But I prefer the 508 questions: How should the city of Worcester be making its money? What is the correct tax rate for Worcester homeowners?

Those kind of questions do not ask for a soundbite.  They ask that you’ve done your homework and are not just parroting whatever you think the people who vote want to hear.

Tim Beaudoin had the only response: “I must say that Article 8 of the charter, concerning Neighborhood Area Councils, has long held my attention and deserves serious discussion.”

The idea of neighborhood councils is not a bad one, but I have serious concerns about how they would be implemented and what the ultimate goal(s) would be.

So — some questions I’d rather see asked:

This post is partly a friendly reminder that 508 is looking for input on the wording of two questions: one on sustainability, and one on the relationship between the manager and the city council.  I do think that we have the ability to frame at least some of the election discussions away from easy soundbites that mean nothing and towards real ideas and real answers.

We were at dinner last night with friends.  One of those friends overheard part of a conversation at the next table.  It was a first date.  And what else does one talk about on a first date but…the city of Worcester?  (I wish I were joking.  They were comparing Worcester to Allentown, PA.)

Mike and I put together a list of the folks who’ll be appearing on the preliminary election ballot (for City Council) and the November ballot (for School Committee).

One of  the folks who will not be appearing on the ballot is Gabe Rollins.  Worcester has seen a blogger run for School Committee and win, and it would have been interesting to have had a blogger in the running for City Council as well.  Unfortunately, this won’t be the year to see that happen.

For you street sign enthusiasts, Tracy sent along a couple of great links: a fence made of recycled street signs (as I said at the City Council a couple of months ago: Sign Shop — call me!) and a street sign mistake in NYC.

The Burns Bridge is a done deal.

Tomorrow (Thursday), the Worcester Public Library will host a Tidepool Adaptations program in the Children’s Room at three times: 10am, 11am, and noon.  Best for children ages 7 and older.

Fridays are still free and fun, though there’s nothing in the greater Worcester area this week.

The Art in the Park Opening Celebration will take place on Saturday, June 30, from 3-pm at Elm Park.  More information here.

And remember that tomorrow night Worcester Film Works will be presenting Back to the Future on the Worcester Common.  If you’re a blogger or reader and want to meet up, let’s meet around 6pm near the WWII oval memorial. 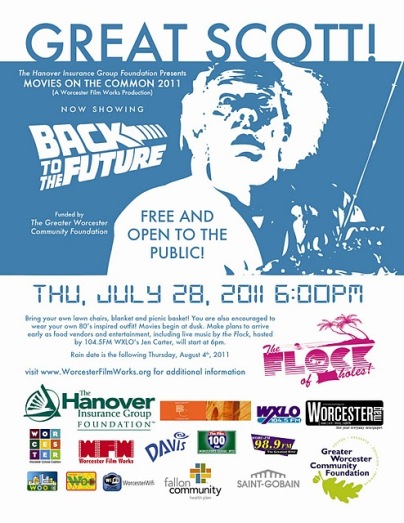 I got a lovely note from a guy who’s new to Worcester but not to blogging asking when our next get-together would be.

Lucky for him, we’re meeting twice this week (though “we” will likely be different groups of people):

Tomorrow (July 26) at 7pm, we’ll be at the Tornadoes.  If you’d like to come, just buy a grandstand/general admission ticket and meet us in section C (near first base).  I also have one free ticket for that game that belongs to the first person who emails me.

Thursday, July 28, Worcester Film Works will be showing Back to the Future. If you’d like to meet up, let’s plan on being near the middle part where the oval WWII memorial is.  (The festivities start at 6pm.)

I know some of you (well, maybe it’s just me and Cathy) would like to see a Worcester Shakespeare Company production.  Cathy and I would prefer the comedy to the tragedy.  Would anyone else like to go see Comedy of Errors on a Saturday or Sunday?  Look at the schedule and let me know what works!

The words are: Mad props to the Shrewsbury Board of Selectmen, who opposed the through arch design of the Burns Bridge:

This resolution comes as the Board of Selectmen in Shrewsbury sent a letter to the state expressing their concern over the possibility of switching to the design advocated by many local representatives.

“The Board of Selectmen will be concerned with any change in scope of the project, which would create an elongated construction period,” wrote Board of Selectman Chairman Jim Kane in a letter to a MassDOT official. “Our business community can ill afford an additional adverse impact result from this extraordinary construction effort.”

I spoke with one reader over the phone sharing the BoS’s concerns that switching this project from a two-year to a four-year plan would really impact the businesses in Shrewsbury.  (I never thought I’d say anything supportive towards Shrewsbury, but there’s a first time for everything.)  Regular readers know what my other concerns were regarding the last-minute interruption of the project, but I don’t think I wrote about the potential business impact on the blog.

So, as you’ve likely already read, there will be a “compromise” on the Burns Bridge design; the scare quotes are there because it seems like MassDOT was pretty much able to prevail in their quest for the steel deck by adding a few ornamental features.

From the Daily Shrewsbury:

“It will be like the Longfellow bridge in Boston,” [State Rep. Vincent] Pedone said, noting that their will be additional ornamental aspects to the design. “This will be a signature piece for Worcester and Shrewsbury. It is the same type of bridge, but it’s going to be a better looking bridge than what is there.”

I suppose now would be the time to note that it’s a bit tough to have a “signature” bridge that’s supposed to look like the uglier mini-me of an iconic bridge, but I’m just too happy to gloat at present.

(Also, Shaun Sutner did a great job with live-tweeting the meeting.)

Let’s hope we get a bridge that enhances its surroundings, that is able to tie in to pedestrian areas, and that is ultimately better than we deserve.

The roof is off the bus stop on Belmont Street; the wall is being reconstructed (though it’s not that obvious from the pictures):

While I was out yesterday trying to snap a halfway decent picture of the underside of Franklin Street, I figured we were overdue for some Putnam Lane photos… 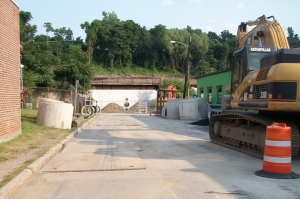 The last day for the Holden Free Store is tomorrow, July 21; it’ll be open from 3-5pm.

…I would like to note that the Larouche PAC will be meeting at the library on Tuesday, July 26.

No news yet on whether there will be singing:

(Serious question: why is there no Wikipedia entry for “Larouchian polyphony”?)

Now, I find the Larouche movement to be misguided and misleading at best and cultlike at worst (not to mention their posters make my skin crawl), but as there are other political groups that periodically meet at the library (Democratic City Committee among others), I don’t see how you can exclude the Obama-with-Hitler-mustache-ites.

I’m interested to see who might protest the Larouche PAC, though.  (More in a theoretical sense.  Please don’t protest them.  I hate having to run the gauntlet while returning materials.)

On a same-but-different note, if you haven’t seen Louis Theroux’s documentary Louis and the Nazis, it’s well worth a (very long) watch:

As an addendum to the Franklin Street Temporary Lights post, here’s the best picture I could get of the work going on underneath the lights.

(I couldn’t get very close, and I stood on a jersey barrier in the hopes of getting a decent shot.  I welcome anyone who can get a better one.  Needless to say…it looks pretty scary over there right now!)