I’ve spent the past few weeks, as I’m sure you have, waiting for the winter of our discontent to be over.

Alas, March 20 has come and gone, the city manager has made a formal announcement that he definitely does not want the job, and yet here the City Council remains, fixated on someone whose contract expires in October rather than doing what they should have done all along and just hire an executive search firm.

To be fair, it appears as if Councilors Rosen and Rivera are the ones pushing [$] to extend CM Augustus’ lame duck period.

But it was the Mayor and certain Councilors — past and present — who pushed us into the current situation, not helped by Councilor Palmieri’s insistence that the emphasis of many of the Municipal Operations “listening” sessions focus on an individual personality.

None of this was helped by members of the press — who kept the “will he or won’t he” question active for the fifteen Worcesterites who actually felt this was a real question — as well the City Manager himself, who could have put a stop to this nonsense and chose not to.

So Clive McFarlane is able to write a column [$] about Augustus’ “veracity” and integrity as if they were rare qualities rather than a bare minimum for membership in the human race.

I’m sorry, but on my planet, praising a fortysomething-year-old man for keeping his word is a bit like praising a ten-year-old for being potty trained.

Whether the manager has integrity or not is a bit beside the point; if he weren’t a man of his word, one would expect his employers to show him the door.

The problem is that many of his eleven employers wouldn’t know integrity if it bit them in the hindquarters.

Continuing to wave this job in front of him is a bit like trying to sign your favorite Catholic priest up for match.com.

Get the search firm and find a new city manager.

And once you have him (or her!), remember that that individual is a manager, and that the Council’s responsibility is to give that manager a to-do list.

For too long, we have looked to city managers for vision.

The City Council is the employer — the Council’s job is to give guidance, to come together as a body and talk about real issues and, in a collaborative way, decide which direction the city is going to go in — and empower the manager to carry out that vision.

This is a team effort.

The manager is just one player in this team, and he’s the player who’s supposed to carry out the wishes of the people through the Council.  If the Council doesn’t give him direction, then how are the people’s wishes being carried out?

You can look at Mike O’Brien as a cautionary tale.  The Council gave him free rein and, at times, contradictory directions.  Witness CitySquare, which was supposed to be mixed-use and which does not contain any housing or any street-level retail.  Or a freight yard in the middle of the city.  Or a continued fight that we will not win against the EPA.

Mike O’Brien had many admirable qualities.  One of them was not his attempts to fill the vacuum where Council leadership should have been.  I don’t fault him for that.  I fault his employers, who could have and should have given him better direction — any direction.

The next city manager offers us a chance for a fresh start.

We can hire someone who has experience running a municipality or other large organization.

The City Council can actually act as an employer and provide guidance and direction to that individual.

But we’re not going to get there if we still keep pining for Ed Augustus.

Get over the breakup and start looking for a new prom date, Worcester.

We were never even going steady with him, anyway!

Full disclosure: I have not attended any of these sessions because I care about my sanity more than I care about appearing at a public meeting.

And I was out of town for the last meeting, but I have watched the video.

Within the first ten minutes of the meeting, there was one speaker (Jerry Powers) who spoke eloquently about the impacts of stormwater in general and a private road (adjacent to Coes Pond) in particular.

What were relatively benign comments about the process for private street conversion — that is, that opposition is given a lot of weight even with environmental concerns — turned into a full-on rant from Councilor Palmieri.

Now, perhaps my respect and admiration for Mr. Powers and his work is clouding my judgment, but no citizen deserves to be berated by Phil Palmieri after offering thoughtful comments.

What perhaps hurts me the most — as it hurt me during the slots parlor hearings — is when people I love attend these meetings and have to see the utter disregard some elected officials have for the process and the people they’re supposed to represent.  I’m glad to see people like my former teacher Amy West showing up and speaking truth to power, and it’s so frustrating that people like her are treated so shabbily.

I recommend especially watching the video around the 45 minute mark, where Bill Bernhardt speaks for all of us in telling Councilor Palmieri to listen and not interject his own comments after every speaker.  Palmieri said that, as chair, he has the right to ask questions of the speakers.

Councilor Palmieri must be the only person capable of making a question that ends in a period and requires no reply.

It’s not about information gathering, it’s about having the last word.

And the last time I checked, these sessions were supposed to be about what we want in a city manager, not who we want.

On a recent walk-through of God’s Acre & Swan Avenue in preparation for the upcoming Earth Day Cleanups, we discovered that God’s Acre has a new resident: 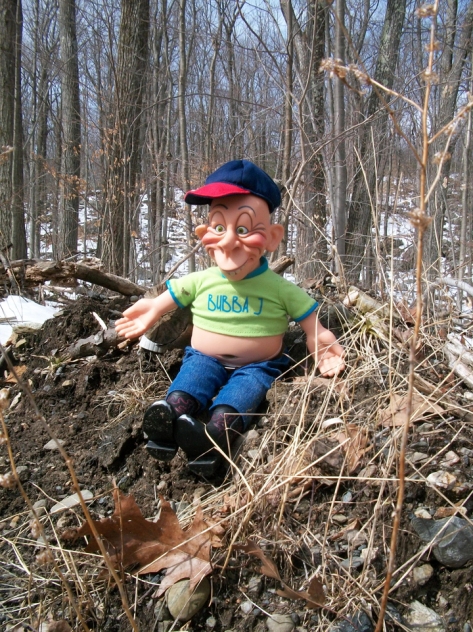 Meet Bubba J; we’re not sure if he’s been placed here as a guardian angel, or a new mascot for the area, but the choice is so many shades of apt that I scarcely know where to begin.

Worcester’s Wild West, if you’ve never been, is an area west of Mill Street, south of Tatnuck Sq. and north of Main Street.  It’s a hilly region that’s home to many of Worcester’s bumpy, unpaved “private streets”.  The few paved byways are a slalum course of potholes occasionally filled by an ad hoc self-appointed neighborhood posse.  If there were a few more pickup trucks on the lawns, you might be forgiven for thinking you’d woken up in Appalachia.

So now we have Bubba J.  Littering in the God’s Acre area has been light this winter, so perhaps we have Bubba to thank for keeping out the trash. 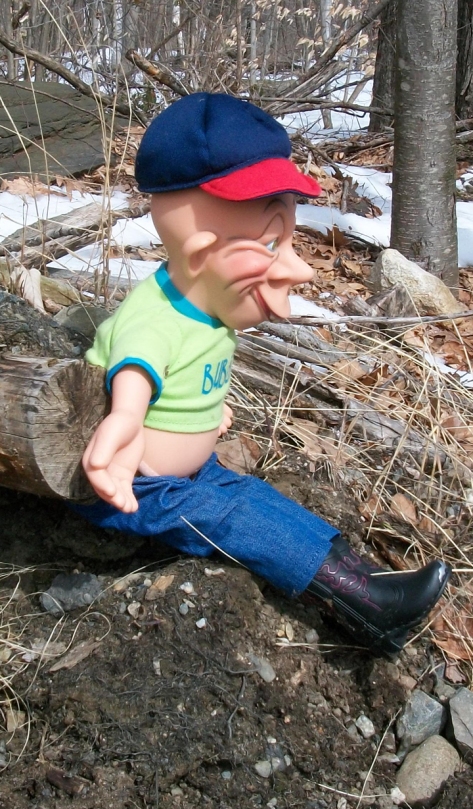 My children were along for the Earth Day assessment hike, and saw Bubba.  They were afraid of him.  But I take great comfort in this little fellow minding the hills & hollers of Woo’s Wild West.  He might even protect us from the evils of fluoride, homeless shelters, smart meters or indoor plumbing . . . and anything else that might make the villagers in Woo’s Wild West ornery.

Anyone who’s lived in New England a while (or watches This Old House on PBS) knows that some folks in the northeast pronounce the word “drawer” as if it lacks the second syllable. Most people who’ve made it through 3rd grade, however,  know how to spell it properly, even if they choose to pronounce it like Tom Silva does.

Imagine my surprise, then, to find this item in the aisles of Ocean State Job Lot: 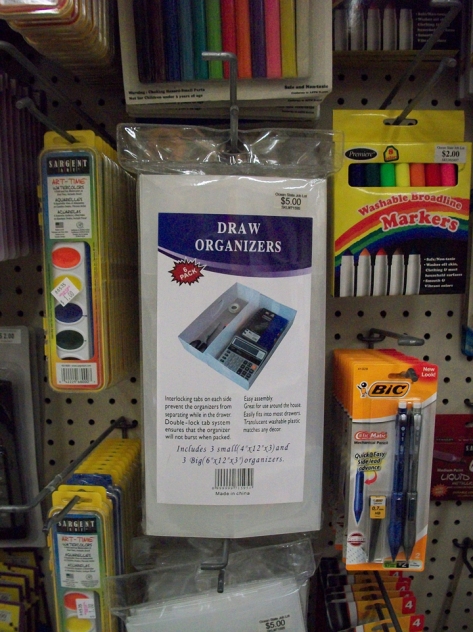 It’s only $5, but check their weekly flyers & see if there’s a cuepon.

If you run out of dirty snow at home, wander on down to Webster Square Plaza & get some more.  We’ve got plenty. 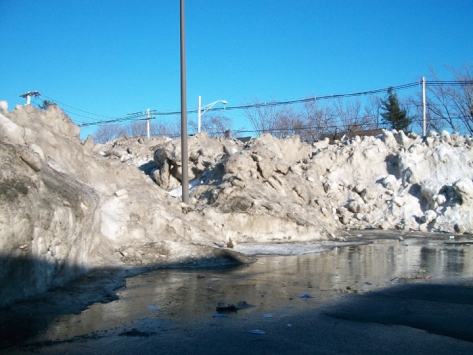 (Jeff is often on my mind, but never more so than when I see peaks of dirty snow in shopping centers…)

Secrets and Stories of the Oread Castle, and the Life of Eli Thayer

Built in 1849, the Gothic castle of the Oread Institute used to tower over Main South from its hilltop perch. Founded by reformist and statesman Eli Thayer, the Institute was one of the first womens colleges in America.

Join the Friends of Hope Cemetery for their annual winter lecture as Preservation Worcester Docent Jan Parent discusses the history of the Oread Insitutes castle, and Historian and Interim Director of the Office of Government and Community Relations at the College of the Holy Cross John Anderson explores the life of Eli Thayer. 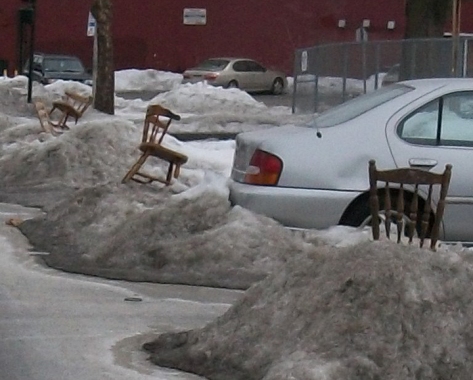 If you’re interested in the future of downtown, please consider attending the Planning Board meeting on Wednesday, March 5, at 5:30pm.  Among other things, they’re having a second hearing on the proposed Commerical Corridors Overlay District.

You can find out more about the proposal on the city website.

We now have all listening sessions scheduled:

These meetings are an opportunity for the general public to provide input into the process of selecting a City Manager. The Committee shall conduct a total of five listening sessions; one in each of the five City Council districts.