As some of you have probably noticed, Worcester recently removed the parking meters in the McGrath lot next to Worcester Public Library. Library patrons and other downtown visitors must now remember the number of the space they park at, walk over to one of two pay machines (at the corner of Salem Street and Library Lane), and pay for however much time they think they’ll need.

But be careful — the lot is now divided into two areas: 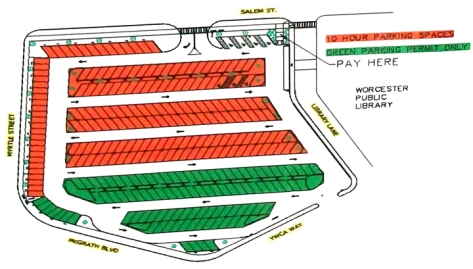 You can tell you’re in the “orange” section when you see these blue signs:

However, each space in that section, helpfully, has an orange number tag:

…and the same number is stenciled onto the pavement in a yellow square, because you needed more color in your parking experience:

The “green” section starts off sensibly enough with a green sign:

…but the parking spaces there have orange number tags: 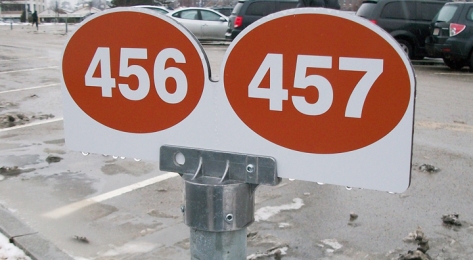 Confused yet? Wander over to the pay machines at Salem St. and check out the helpful instruction sheets: 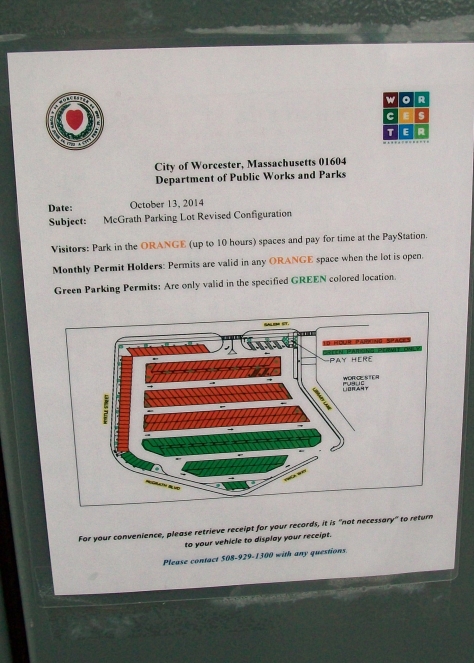 Despite all the color confusion, we can infer from the information sheets and the signage in the lot that paying parkers should park in the Blue/Orange area, while someone who has a green permit on their car should park in one of the spots with orange tags but near green signs.

What if you have a McGrath parking tag like this one:

These tags are used by some volunteers with the Friends of Worcester Public library, who are at the library volunteering their time in one way or another. The new parking system says nothing about such tags.

One Friends volunteer (not me) recently received a ticket at the McGrath lot while using one of these “PL V” tags:

…for parking 15 minutes in the (barely used) “green” section in front of an orange number and over a yellow square — instead of taking up a spot in the paying section. That ticket is currently being appealed on the basis that the parking lot sections and their usage is rather unclear despite the multi-color signage, and the information sheets at the payment machines don’t address the issue of “PL V” tags at all (see above).

(Side note: on another occasion, I was able to take a look at the few cars parked in the green placard section, and the placards indicate that they are Quinsigamond students.  It warms the cockles of my heart to know that we saved all those parking spaces for the WBDC’s tenants’ use!)

The Friends of WPL have also heard questions from patrons who have handicapped parking placards who were visiting a recent Friends’ book sale at the library. Even on a good day, the handful of HP spaces can fill up quickly, and they often do on book sale days. Where should people with the HP placards park in the McGrath lot when the accessible spots are full, and if they park somewhere else, do they have to pay? The instructions don’t address this.

The 2014 changes to the McGrath lot don’t seem to have been well thought out or well executed. They might be improved by:
1. Green number tags in the “green” section
2. Orange signage (instead of blue) in the “orange” section
3. More comprehensive information (including info for “PL V” tag holders) at the payment station

All of that would be forward-thinking, but the changes made in 2014 seem to have taken us a step backward instead.