At approximately 5:20pm this evening, I will be driving home westbound on Belmont Street between Plantation and Shrewsbury Streets.

This has never been my favorite part of my commute.

The street was previously a washerboard, and was then scarified with minimal (or nonexistent) lane markings.

But at least the need to to focus on which lane I was driving in distracted me from the “acorn lights.”

For the past week or so, this stretch of Belmont Street has been an absolute disaster.

The problem is that “they” have painted lane markers that create an extra middle lane right before Plantation Street (no complaints there!) and then make it mush back into the original middle lane rather abruptly somewhere between Plantation and Shrewsbury.

I would have taken a picture of this, but I’m desperately trying to avoid an accident whenever a good picture presents itself.

You see, there are always a few people who find the phantom lane and decide to drive in it.  Those people tend to be made up of two distinct categories: (1) people with out-of-state plates, and (2) Worcesterites who can’t believe their good luck that the city might finally resolve the “will the guy in front of me in the middle lane stop abruptly at the ‘no left turn’ signal when I want to go straight” conundrum.

Unfortunately, a short way up the road, right before everyone’s favorite bus stop, the phantom lane suddenly ends and gets merged back into the middle lane.

This means that a finger is invariably raised, an accident is deftly avoided, and/or an out-of-stater becomes mightily confused.

A fourth lane to relieve the “will he or won’t he make a left turn” middle lane tension would be welcome, but the disappearing lane is going to cause an accident very soon.

ETA, 8:30pm – I noticed that the phantom lane lines have been (mostly) painted over, but the sun was so bright that it shone on the painted-over areas and it still looked like a separate lane (and motorists were treating it as such).  So, the phantom lane lives on.

This Saturday, June 23, the Friends of the Merriam-Gilbert Public Library in West Brookfield will be holding their Book & Bake Sale from 9am-2pm at the library (3 West Main Street, West Brookfield – right on Route 9).

I cannot recommend this booksale enough.  I go to many a booksale in the course of a year, and I always look forward to this one.

Their Friends group is always super-helpful and friendly, and the books and audio are priced to move (and usually in perfect shape).

From my experience, there’s usually a big flea market going on that Saturday on the West Brookfield Common, so if you like other stuff with your books, you can usually find it.  (However, it also means that parking is a bit tight in the library area, so you might have to drive along Route 9 a bit to find a spot!)

Also in recommended booksales (though I’ll post a reminder next Wednesday): the Thayer Memorial Library in Lancaster will be holding a children’s book sale (3/$1) next Wednesday from 3-8pm.  I’m a big fan of their Friends group, and their book sales tend to be very good.

Come visit and see what the Worcester Art Museum has to offer the whole family.

Worcester Earn-A-Bike will be holding a kids bike sale Saturday, June 23, from 12-4pm.

All kid-size bikes $5–ready to ride!

They’re at 34 Cambridge St. in the rear.  (Directions: turn right one block before Price Chopper if you are coming from Main St./Webster Sq.)

The Worcester Art Museum will be free in July and August, courtesy of Barry Morgan.

From the Globe article:

In the next decade, Waschek hopes to increase attendance to 200,000 a year. He also wants to consider making the museum free permanently, though he is not sure if that is possible. The museum receives no public money to offset lost ticket revenue.

While the rest of us are scratching our head about what question was being answered on the vinyl-shrouded rust wall alongside the YWCA, here are some specific answers for a few local notables.

The resounding answer from the rest of us: 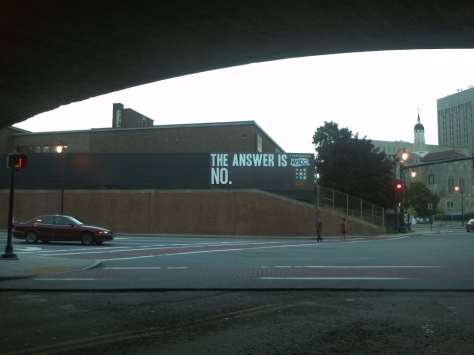 For the well-funded (but secret) hearts & serifs cabal: 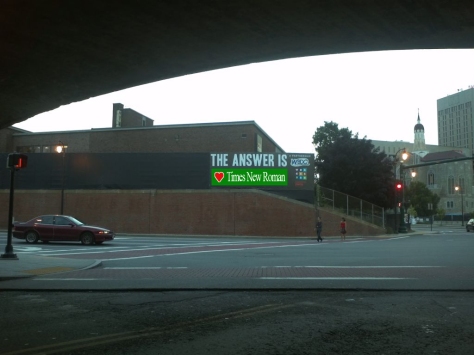 For the handful of Worcester PBS viewers:

For those who wish Worcester was cool:

For those of us who wish we could turn back the clock to a time when the bridge had a better paint job: 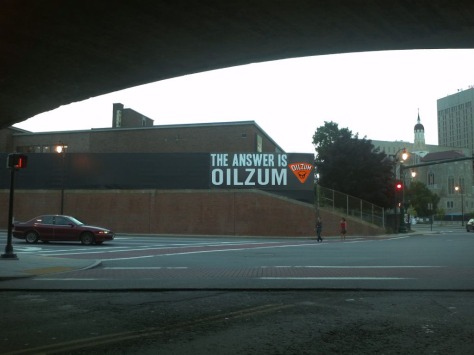 (Thanks to Brendan for the original picture!)