Five days ago this blog featured a hydrant on Upland St. whose connection points were located so low to the roadside surface that one was partially obstructed by asphalt curb-edge, while the remaining two might be accessible year-round only if we have a nearly snowless winter.

This morning I was shocked & pleased to see that the Upland St. folks have a new hydrant. 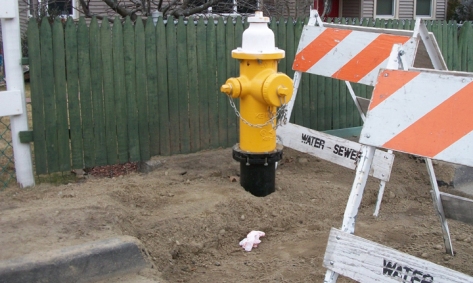 That they installed a “Kennedy” brand hydrant should be worth a few Brownie points around here.

I suppose there could have been legions of neighbor complaints on file and that DPW just happened to have gotten ’round to replacing the hydrant this week.

I’d prefer to give the Public Works folks the benefit of the doubt — that they heard of an imminent public safety concern and addressed it quickly and effectively.

Thanks, DPW, for putting a smile on my face this morning, and helping the residents of Upland St. sleep soundly at night knowing that the fire department can now get their hoses on the hydrant in time to save a house . . . or a life.

Since there’s now a big square cut into Upland St., here’s a peek at the stratigraphy of the road surface:

Perhaps not as thick as I’d have imagined, given the position of the old hydrant.

I wondered in passing how long the road would have a hole in it, but less than two hours after these photos were taken, a first layer of asphalt patch had been applied, both in the hole and around the hydrant base.  I expect it’ll look pretty good by later this week.

Kudos, DPW!  I hope while you were there someone radioed back to the signage design wizards on Albany St. that right next to the new hydrant is a street name sign that dates from the 1960s and has the retroreflectivity of a brick:

Not nearly as pressing an issue as the sunken hydrant . . . but when we’re wasting taxpayer dollars replacing legible 21st century signs elsewhere in Worcester for the sake of hearts & serifs, seeing one of these golden oldies still in place makes me rather grumpy.