It’s been a few years since the city decided to abandon slogans for one night.

What is it about Worcester that inspires so many slogans?

Why is it we always talk about Worcester as if she were a person in her own right?

(I know I’m taking a bit of a leap using feminine pronouns to talk about Worcester.  I use them solely because she’s the ship we’re currently traveling on.  If Worcester had a sex, she’d be a hermaphrodite.)

Let’s say you describe your boyfriend as “tough.”  Your interlocutor hears that as “Sylvester Stallone wannabe”; you meant it as “he doesn’t believe in winter jackets unless it’s twenty below.”

You describe your boyfriend as “sweet”, which makes it sounds as though he sends you flowers on a regular basis.  What it really means is that he tolerates your Mickey-Rourke-up-to-and-including-Harley-Davidson-and-the-Marlboro-Man obsession.

To that end, I feel like I as a Worcesterite should create at least one slogan for our city.

And that slogan is…

(I think this would work really well as a Yo Gabba Gabba/Alka Seltzer mashup.)

Of course, I proposed this to my husband (who, incidentally, not only tolerates but feeds my Mickey Rourke obsession) and came up with a slogan of his own…

…you can just make out two people enjoying Federal Square in this picture.  In fact, the man (sitting, in the green sweatshirt) is taking a picture of the woman (standing, striking a post).

A friend took this picture Wednesday night, and the funniest thing is that these were not the first people we saw taking pictures of the beautiful lights downtown.  I’ll try to take some less blurry pictures tonight. 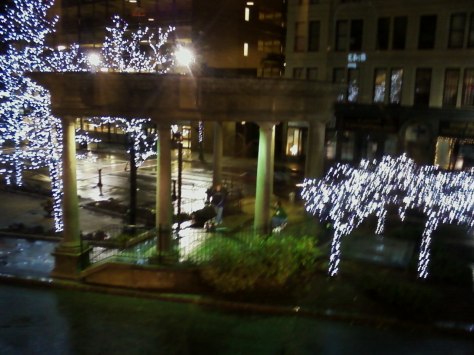